More Than A Love Of Motorcycles And Cars 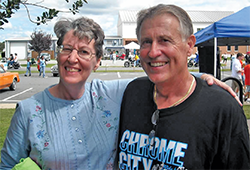 Spud Blake has a heart for Benedictine. A retired deputy chief of police for the Prince George's County Police Department and former chief of staff for the Maryland State Police, Spud founded Benedictine's Chrome City Ride 14 years ago after running a similar event on the western shore.

Over the last 19 years, the event has raised close to $2 million for Benedictine, thanks to every motorcycle and classic car enthusiast who supported Chrome City Ride.

Spud recalls, "I co-founded the statewide Concerns of Police Survivors (COPS) Ride with Colonel David B. Mitchell, the superintendent of Maryland State Police, and John 'Rodney' Bartlett, president of the Maryland State Fraternal Order of Police, and chaired that event for eight years. My law enforcement friends who worked with me on the (COPS) event were aware that my sister, Barbara, is a resident in a Benedictine home and asked me why we hadn't done a similar event for the organization," says Spud, a member of the Benedictine Board of Trustees and chair of Chrome City Ride.

That spark of an idea became a flame after Spud presented the idea to Benedictine's then Executive Director Sister Jeannette Murray. She loved the idea because the event involved the kids and participants could actually come and see Benedictine, the beneficiary of the Ride. It eventually became her favorite event of the year.

"It has been very heartwarming for me to see what the community does for Benedictine during this event. Each year more and more parents and loved ones get involved and it's nice for them to see this support," Spud comments.

Spud's family's journey to Benedictine began in 1999 when he brought his mother to see the campus after the urging of a family friend whose daughter was at Benedictine. Spud's younger sister, Barbara, is developmentally disabled and was being cared for by his mother, who was then in her 70s. The family needed to make decisions about Barbara's future and Benedictine fit the criteria as they began to search for Barbara's next home.

Spud reflects, "We had looked all over the country. Benedictine is first-class. The residents of Benedictine are treated with so much dignity. It has been a fantastic place for Barbara and for our family." After Barbara arrived at Benedictine, Spud's mother immediately got involved and struck up a friendship with Sister Jeannette. The two became friends immediately and ironically, died within two months of one another in 2013. Spud remarks, "Sister Jeannette rode in on a motorcycle for the Chrome City Ride. For me, this ride honors both my mother and Sister Jeannette, who left a tremendous legacy at Benedictine."

One of Sister Jeannette's dreams was to create a place for individuals that would take them into their senior years. Spud's sister Barbara is just one of many individuals in the Adult Services program for whom that dream has become a reality. Barbara lives in a Benedictine group home located in a Ridgely neighborhood, and she worked at Sweetly Made, Benedictine's former retail store in Denton. For Spud, the peace of mind he and his family have, knowing that Barbara is safe and enjoying this stage of her life, means so much. He comments, "I am blessed to be a part of all of this."