e-newsletter
Thank you for your interest in our e-newsletter. Our records indicate that you are already receiving our e-newsletter. If you would like to make changes to your frequency settings, please click on the "My Account" link on the left navigation.

The Bond Between Two Sisters 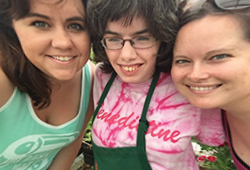 The love between Caila and Ashley Heffernan is like that of any sisters. They love to hang out together and to take selfies of the two of them together. When Ashley, age 28, decided she wanted to run in the November 8th Across the Bay 10k, her sister Caila, age 24, was delighted because the run benefits the organization that she now calls home- Benedictine.

Ashley had run a few 5ks before and decided to spend this summer training for the 10k with ten of her friends, some of whom are law students with her at the University of Baltimore School of Law and others who live in her home county, Queen Anne's County. Benedictine, which is one of the three major charities that the bridge run will support this year, is also selling the race bibs for the event. Other major charities supported this year by the Across the Bay 10k include the Chesapeake Bay Foundation and Bosom Buddies Charities. Ashley comments, "We wanted to work for a charity that meant something to us personally. My friends have known Caila for years and they wanted to support Benedictine, too."

Caila has been a part of Benedictine's Adult Services Program since she turned age 21. Prior to then, she lived at home with her parents and attended Queen Anne's County Public Schools. Today, she lives in one of the Benedictine's Open Community homes and works in the adult vocational program. Ashley comments about her sister, "The amount she has grown and matured since joining the program is amazing. She loves working in the greenhouse and the flower shop and living with friends has really made her thrive. She is loving life there."

Ashley also states that the change has been wonderful for her and for her parents, who have been Caila's caregivers all of her life. They all find that they are worrying less about Caila's well-being and that Benedictine's Open Community Program has given the family a sense of normalcy.

When it came time for Ashley to name her running group for the upcoming Across the Bay 10k , she thought of her sister Caila, who over the years has been nicknamed "The Beast." The group's name then became "Beast's Besties." It just fit. Since then, the group has sold sponsorships for the team shirts and already has five businesses supporting them-Callahan's Gas & Appliances of Centreville, the Subway in Ridgely, Md., GS Proctor & Associates, Inc., of Annapolis, Heffernan Properties, LLC, of Queenstown, Md., and Dixon's Furniture Auction in Crumpton, Md.

Ashley adds, "Caila is so excited that we are running for her and for Benedictine. We are all wearing pink shirts that day so she will see us at the finish line."